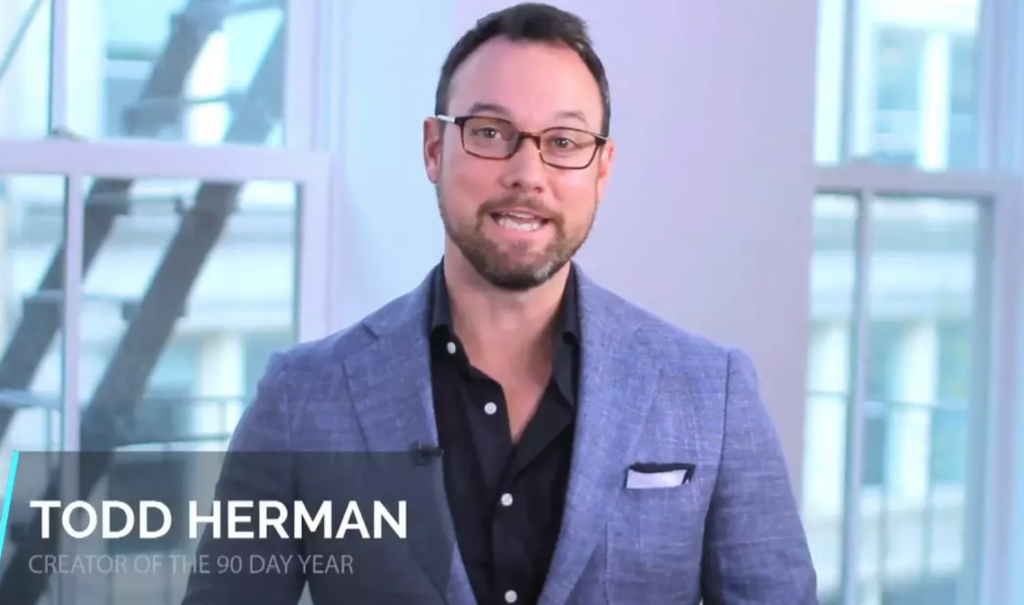 September 2021 Update: Discover how to achieve more in the next 90 days than you did in the last year by focusing on less. Learn more here now.

Todd Herman – Everything You Need to Know

It’s hard to know where to start when talking about Todd Herman because he has an incredible amount of experience and so many accomplishments under his belt. He’s the creator of the 90 Day Year, the founder of The Peak Athlete, the host of the Grit ‘n’ Hustle podcast, and the CEO of Herman Global Ventures. He’s also a family man, a dedicated letter writer, and he isn’t shy about 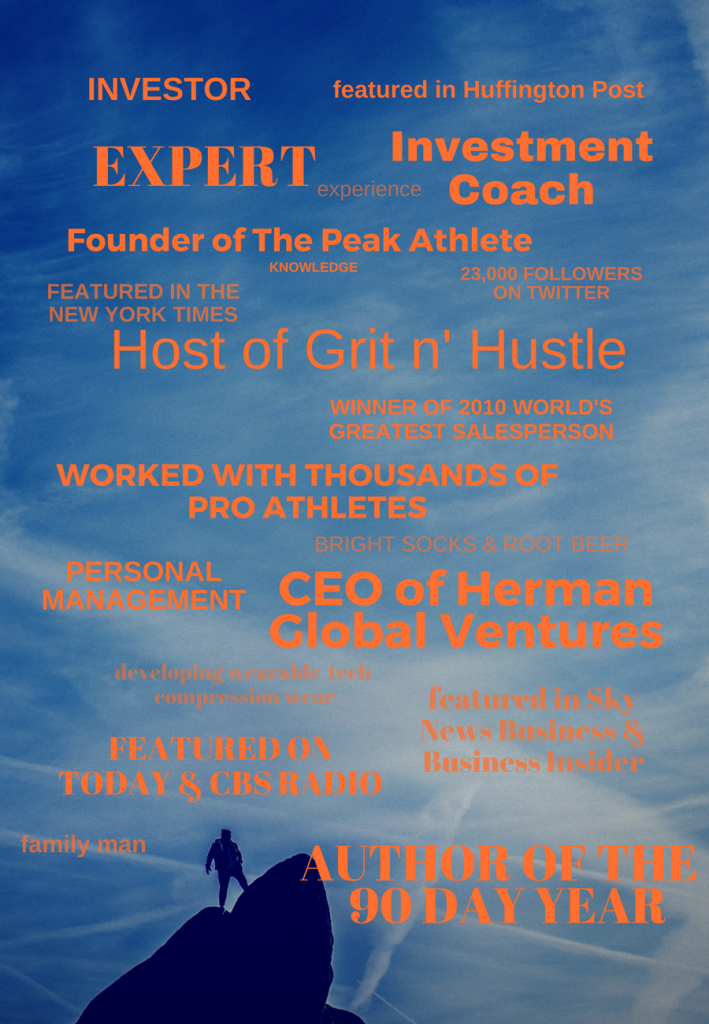 talking about his failures.

Oh, and he loves bright socks and root beer. While he’s currently based in New York City, he has literally worked all over the world — in a total of 82 different countries.

Todd is an investor, a coach, an author, and an entrepreneur. He started his career coaching athletes about how to achieve better performance and has worked with thousands of clients, including professional and Olympic athletes.

Today, Todd is an expert when it comes to coaching business owners about how to achieve a higher level of performance. He describes himself as driven and tough, and one of his favorite things to do is share his knowledge with others.

And Todd certainly has a wealth of knowledge to share.

“[Todd]… has worked with thousands of clients, including professional and Olympic athletes.”

Check out this interview he did on Navid Moazzez’s podcast about building a champion’s mindset, and this Huffington Post interview where he gets real about making his first million.

And definitely don’t miss watching his submission to the 2010 World’s Greatest Salesperson competition, which is sponsored by the advertising agency Ogilvy, in which he sells a red brick. That’s right. A brick. Here’s his opening line: “The story of the simple red brick is one filled with power, struggle, and romance.” The entry won him the opportunity to make another live presentation, and he won the contest by audience vote.  As the winner, besides receiving the deserved recognition, he was also awarded a 3-month fellowship at Ogilvy. 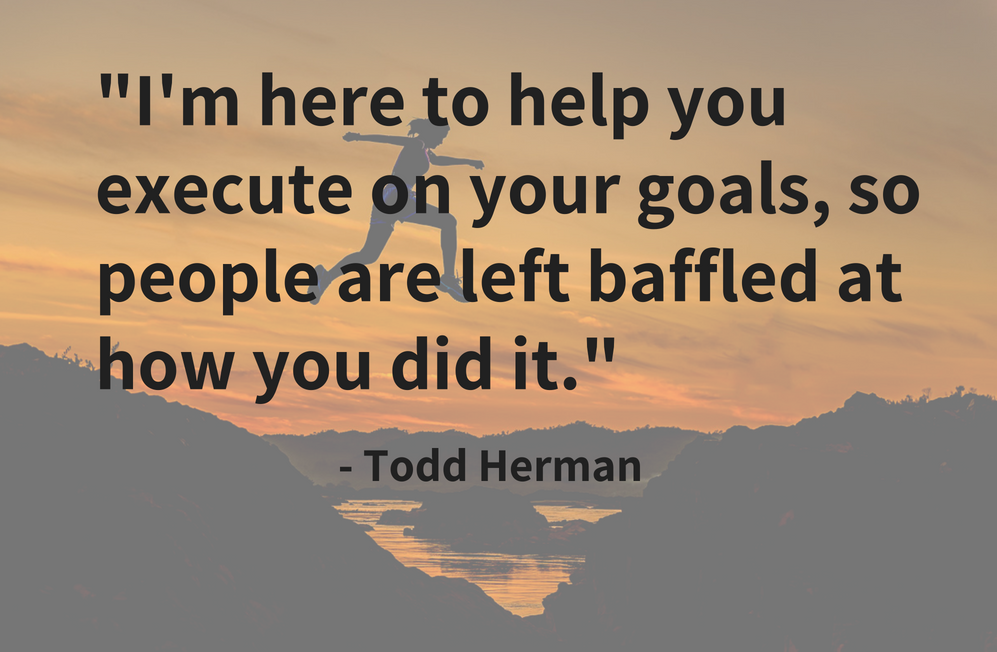 With all that experience, you might be wondering how he spends his days. Currently, he’s focused on three things: scaling up his 90 Day Year program, advising and investing in great businesses, and developing wearable tech compression wear.

His blog and podcast, Grit ‘n’ Hustle, features real, raw stories of how achievers made it.

Don’t miss his interview with Selena Soo, where they talk about how to reach and impact millions with your message, or his interview with bestselling anti-guru author Jonathan Fields about living a good life and why happiness is the enemy. Also, check out his blog to get a free guide to finding and becoming a mentor.

One of Todd’s most exciting projects is his program The 90 Day Year, which launched in 2016. The 90 Day Year was designed for business owners who want to increase their level of performance and “see their business and personal leadership thrive.”

business in 90 days than other people do in a year. The program won Todd a Stevie Award for World’s Best Leadership & Skill Development in 2016.

Daniel loves the program so much that he’s written a full review breaking down everything you must know if you are considering buying the 90 Day Year program.

Check out our Ultimate Guide to Todd Herman’s The 90 Day Year Program, which includes a detailed review, watch this video review, and 90 Day Year planner video breakdown by Daniel.

Also, if you use our affiliate link here you get this awesome 90 Day Year bonus totally for free.

The 90 Day Year is seriously the best personal management program I’ve ever come across. If you’re an entrepreneur or a business owner and you’re frustrated with your (or your team’s) current level of performance, definitely check it out.

We also posted a behind-the-scenes interview with Todd right here.

To sum it up: Todd Herman is an impressively multitalented guy, and he has a tremendous amount to offer to anyone who takes the time to listen. Be sure to spend some time exploring his website, his blog, and our review of his 90 Day Year program, which is truly unlike any other personal management program out there.

[+] Behind the Scenes Interview: https://ryananddaniel.com/90-day-year-interivew-todd-herman-and-daniel-audunsson/

[+] Interview With Selena Soo on How to Impact Millions with Your Message: http://toddherman.me/selena-soo-publicity/