Why Sell On Amazon?

I know this might be a bit of a strange topic to you but even if you’re an experienced seller. But it’s important for you to understand the deeper reasons for why you should sell on Amazon so you stay in tune with the purpose of what you’re doing to stay motivated and connected. If you really are aware of the deeper reasons for why to sell on Amazon, you are much less likely to get distracted and swayed by fear and all the BS floating around in the marketplace.

If you’re new, of course, you might be curious why you really should consider this business model. I’m excited to talk about the deeper, more meaningful reasons for why you should sell on Amazon and specifically, what the future has in store for us and what Amazon is doing.

I’m going to give you a quick overview all about the reasons why you should sell on Amazon and I hope you get a lot of value out of this. It’s going to be exciting and eye opening for you to see this. Let’s begin.

Amazon vs. Your Own Site

Now, let’s talk about why you should sell on Amazon instead of your own site. It’s really important that you understand this not just for background information, but also as a seller. You need to understand the fundamentals of why you’re doing this and how it will work. Even if you’re a seasoned seller, this is key. I think you’ll get something out of it. 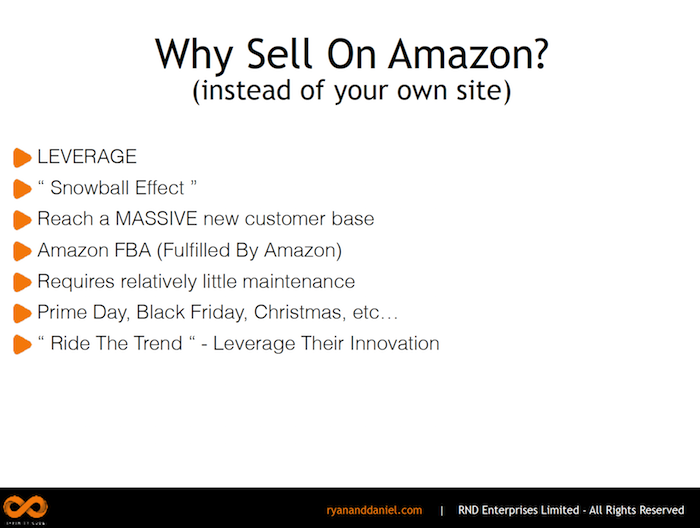 The first reason is leverage. There is so much leverage in selling your products on Amazon because you’re leveraging so much traffic. It’s such an incredible company with just incredible systems and everything. They’re probably the most amazing company in the world and you’re leveraging all of that. So, when it comes to selling online, there is nothing else out there that’s comparable to selling on Amazon in terms of leverage.

There is also a snowball effect. Everything you do compounds. So, when you’re doing the right things, you’re compounding, which Albert Einstein called the “Eighth Wonder of the World.” Compounding is incredibly powerful on Amazon because of the way the site works.

When you follow the right steps and your new products do well, they start to sell even better, and now the results are going to be exponentially larger because of that snowball effect.

You’re getting all this traffic and traction from Amazon and the better you do, the more that success becomes a massive, growing snowball. That leads to the hockey curve exponential growth, which we talked about in the last article.

A Huge Customer Base

You just need to learn how to tap into this customer base, which is what I show you how to do here in this crash course. But you can reach that massive new customer base very quickly, from day one.

On Amazon, there’s also something called the Amazon FBA, which you may know already about, or Fulfillment by Amazon. This means that you don’t have to do any of the hard work yourself. Amazon will fulfill the products; they will handle refunds, returns, and customers’ reports. That means less work for you; it’s just incredible.

You don’t even have to touch your physical product at all if you use Amazon FBA. You can be sourcing some of your products without ever touching them and run a physical products business that is completely digital, because you don’t have to do anything physical.

You can just travel around the world and run it through your laptop, which is what I did with my business from day one. 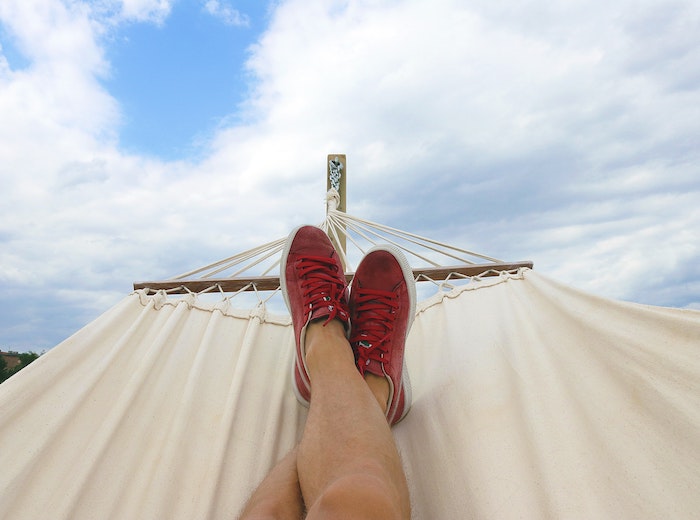 Selling on Amazon FBA requires relatively little maintenance, too. When you have your business up and running, which is very simple to do, then it’s extremely easy to maintain and you can easily delegate all of that to a team. It will pretty much run on it’s own and continue to grow, if you do it right.

Events That Will Increase Your Sales Tenfold

Then we have these incredibly powerful days on Amazon, like Prime Day, Black Friday, and Christmas. During these shopping events, you might sell many times more of your product than on regular days. 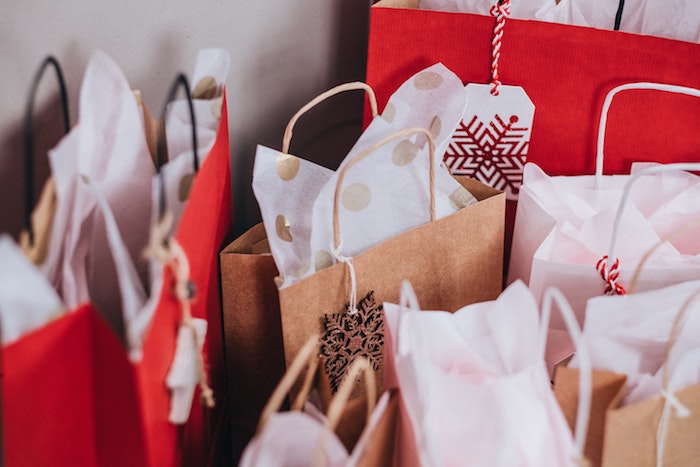 That’s incredible, that when you have a product that’s doing well and then you just absolutely crush it over one or two days during these special events.

You might make many times more than you ever made in a month at your previous job, or at your current job in one month. That’s such a cool feeling.

You can also ride the trend and leverage Amazon’s ongoing innovations. If you look at Amazon’s stock chart, you can see how they’ve been growing and they’re not about to stop. This is the most innovative company in the world and you can take advantage of that growth and innovation when you sell on Amazon. 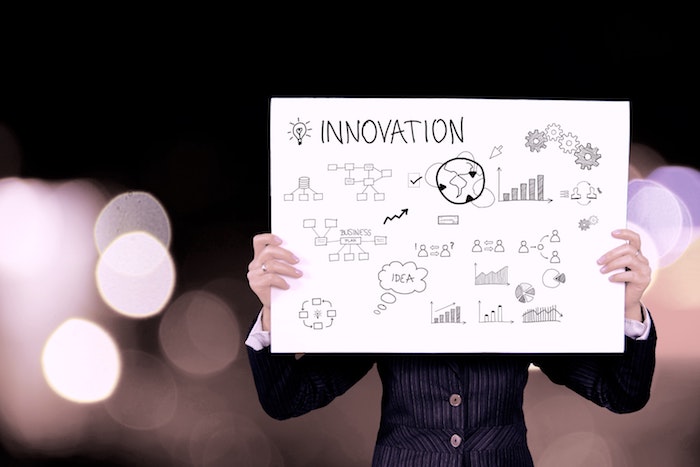 Being on Amazon, to me, is the best opportunity online. If you’ve ever wanted to sell anything or start your own business or just have an online business in general so you can quit your job and just travel the world, there’s nothing greater than Amazon, especially private labeling with Amazon FBA.

Here’s a common question, which totally blows my mind, to be honest, but people will ask and talk about Amazon FBA being dead. They’ll say, “It’s coming to an end,” “It doesn’t work anymore,” “It’s too hard,” “It’s too complicated.”

I’m here to tell you that this couldn’t be further from the truth. The opposite of all those statements is true. It’s no surprise that when the majority of people think something about Amazon, the opposite is usually true. The masses are pretty much always wrong and that is the case with Amazon FBA.

Amazon FBA is more alive than it’s ever been for the people in the know.

For the people that understand it and know how it works, there’s never been a greater opportunity to make money.

That opportunity continues to expand and expand much faster than anyone could fully capitalize on. So, no, Amazon FBA is not dead. It’s more alive than ever.

Amazon: In It For The Long Run 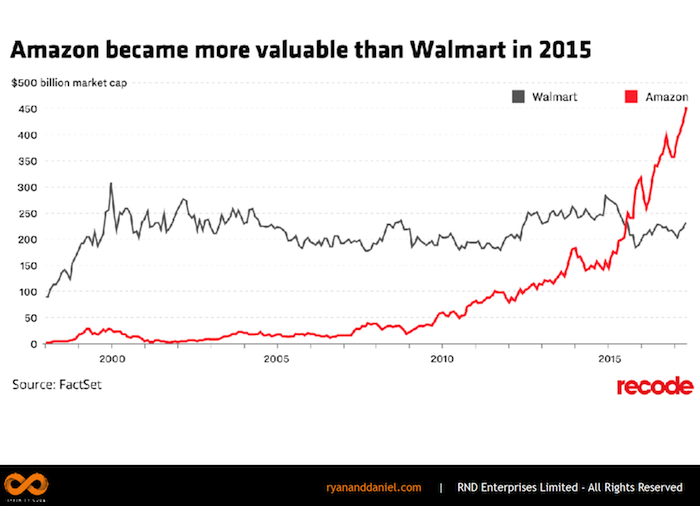 I just want to give you the quick backstory here of Amazon. Amazon just cannot be ignored. Why is Amazon so powerful? Well, it’s making over $100 billion in annual revenue, as brick and mortar retail is dying a slow death. 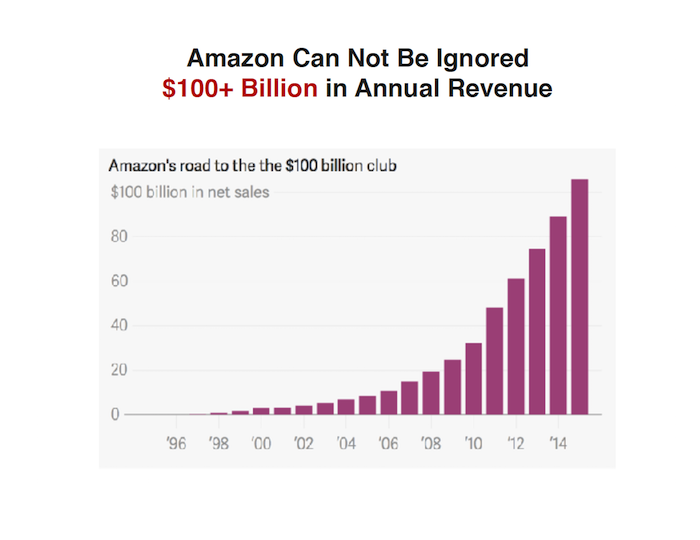 If you’re in the business of selling physical products in a brick and mortar store or you’ve been in retail, you know that you have to move online. You can see that from the graph below. It’s just moving online, which makes sense. 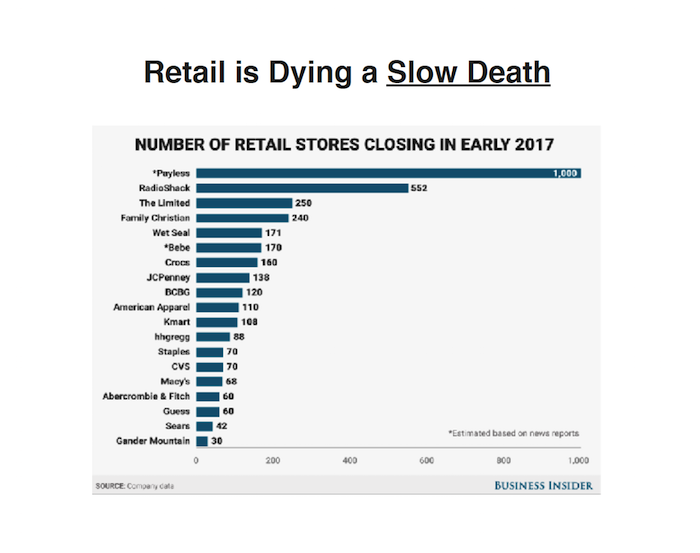 If someone goes to a mall to buy things that they can buy easily online, let’s say on Amazon, and they walk around that mall and spend two hours shopping, you have to question their intelligence, really. Because if you want to get the most out of your life, you don’t want really waste any time doing that kind of stuff unless you really enjoy shopping. I believe 80% of items should be bought online, and people are doing that more and more. 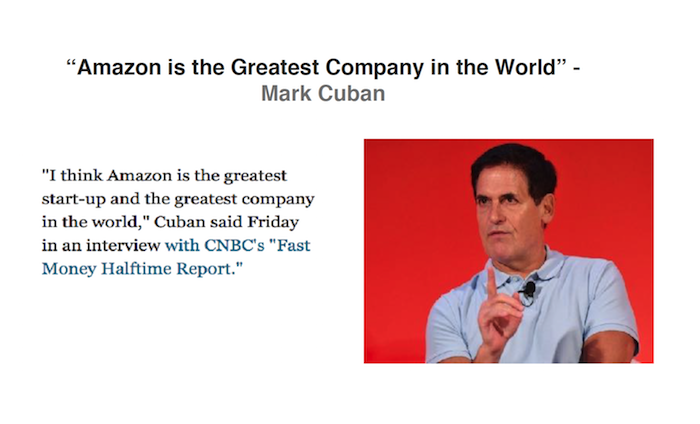 This, for me, is the most exciting thing because Amazon actually has a subscription service called Prime, and you may already be a member of it. Most likely you are a Prime member if you buy on Amazon, and it’s just a genius service. You get a lot of benefits like free two-day shipping. 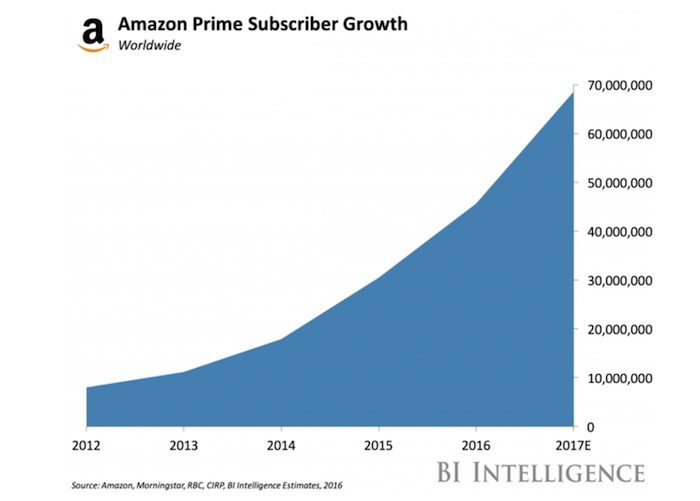 But just imagine this: You have 70 million subscribers paying you $100 per year; that is incredible. That’s seven billion dollars in recurring revenue; there is no subscription-based service in the world that comes even close to this.

This is one of the reasons Amazon is going to continue to grow, because this is not going just disappear or overrun by a competitor overnight.

It’s very hard to stop this growth. That just shows you the kind of market share that Amazon has. This is one of my favorite things to look at, and the number one reason why I want to build my business on top of Amazon. You can’t beat this; there’s no way you can ever compete with it.

All of this really shows you that Amazon is playing the long game. So, you don’t have to worry about Amazon going anywhere, and you can build a sustainable long-term business on its back. Amazon is doing all kinds of things like acquiring Whole Foods, and offering Prime members discounts at Whole Foods.

They’re really, really expanding in so many different directions. They’re even opening up a marketplace in new countries; Australia, for example, just opened up. Singapore also just opened. 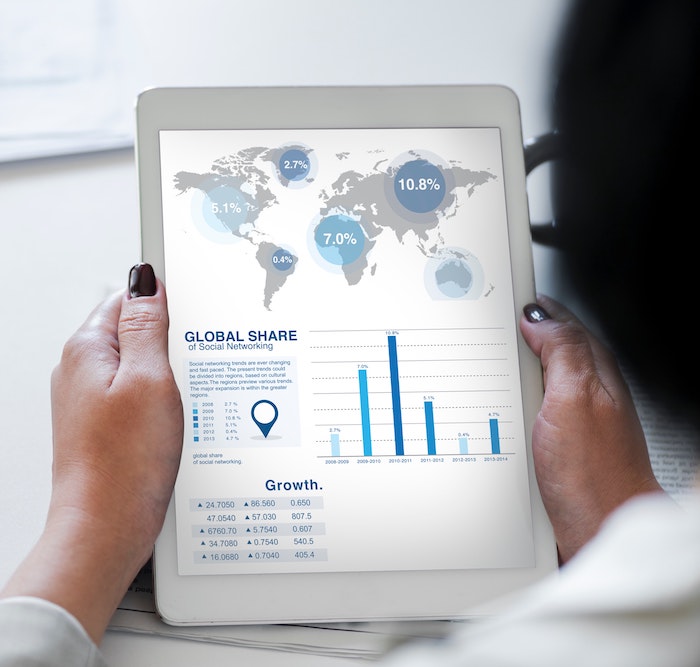 Amazon is expanding internationally and they have well over a dozen different marketplaces in different countries now. They will likely end up being in pretty much every country; they are even expanding into different industries, like movies.

Amazon’s ability to ship things with their own distribution network is just out of this world.

It has the most powerful fulfillment network in the world. Now they can ship to all over the world by themselves, which means they have the lowest cost and fastest shipping. They are just in a league on their own to which people are becoming accustomed.

If you try to do this on your own – beat Amazon’s rates, shipping and speed – you just won’t be able do it. Most likely no one will ever be able to catch up. So, as people become more and more accustomed to Amazon’s level of service and pricing all over the world, I believe that doing e-commerce independently will become more and more challenging.

Your best bet for massive success is to ride the waves on the back of Amazon, and just benefit from all the hard work they’re doing. It’s just a beautiful thing, that partnership you can create with Amazon.

The Best Opportunity Online (If You’re In The Know)

So you’ll need to align yourself with Amazon and just truly become their business partner. Then, you can fully reap the rewards off this incredible opportunity that is here right now. 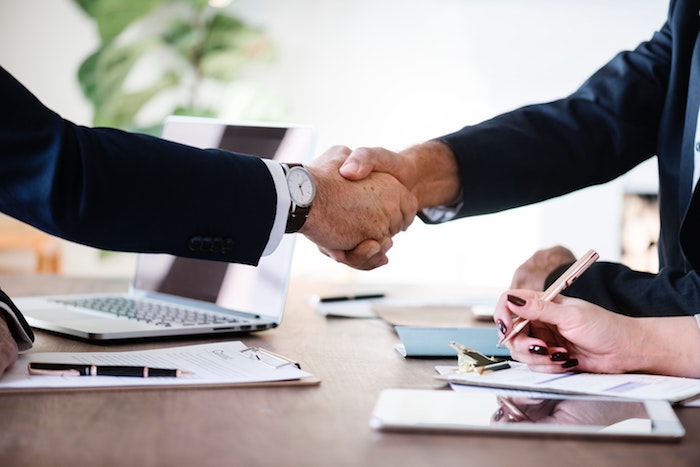 It’s probably one of the biggest and best opportunities that there will ever be online, and there’s more opportunity now than ever. Anyone who says anything otherwise isn’t in the know; they obviously do not understand how this all works.

Do not let these naysayers fool you or scare you away from this opportunity; 80% of people always do the wrong thing and you don’t want to be someone who is part of the herd that’s running away.

Again, there’s more opportunity now than ever, but most people just don’t get it. They’re using outdated strategies and they’re just so far behind on what actually is working right now and what actually gets results. There’s no reason for you to be one of those people because you’re here with me in the crash course.

You don’t want to be a sheep; you want to be a wolf. And I’m going to show you how to be an absolute wolf on Amazon.

So that’s it. If you enjoyed this article or found it helpful, don’t forget to share it with anyone who might be interested. Remember, you can get full FREE access to this whole crash course by clicking the link here. You can also follow along with our updates on our Facebook page.